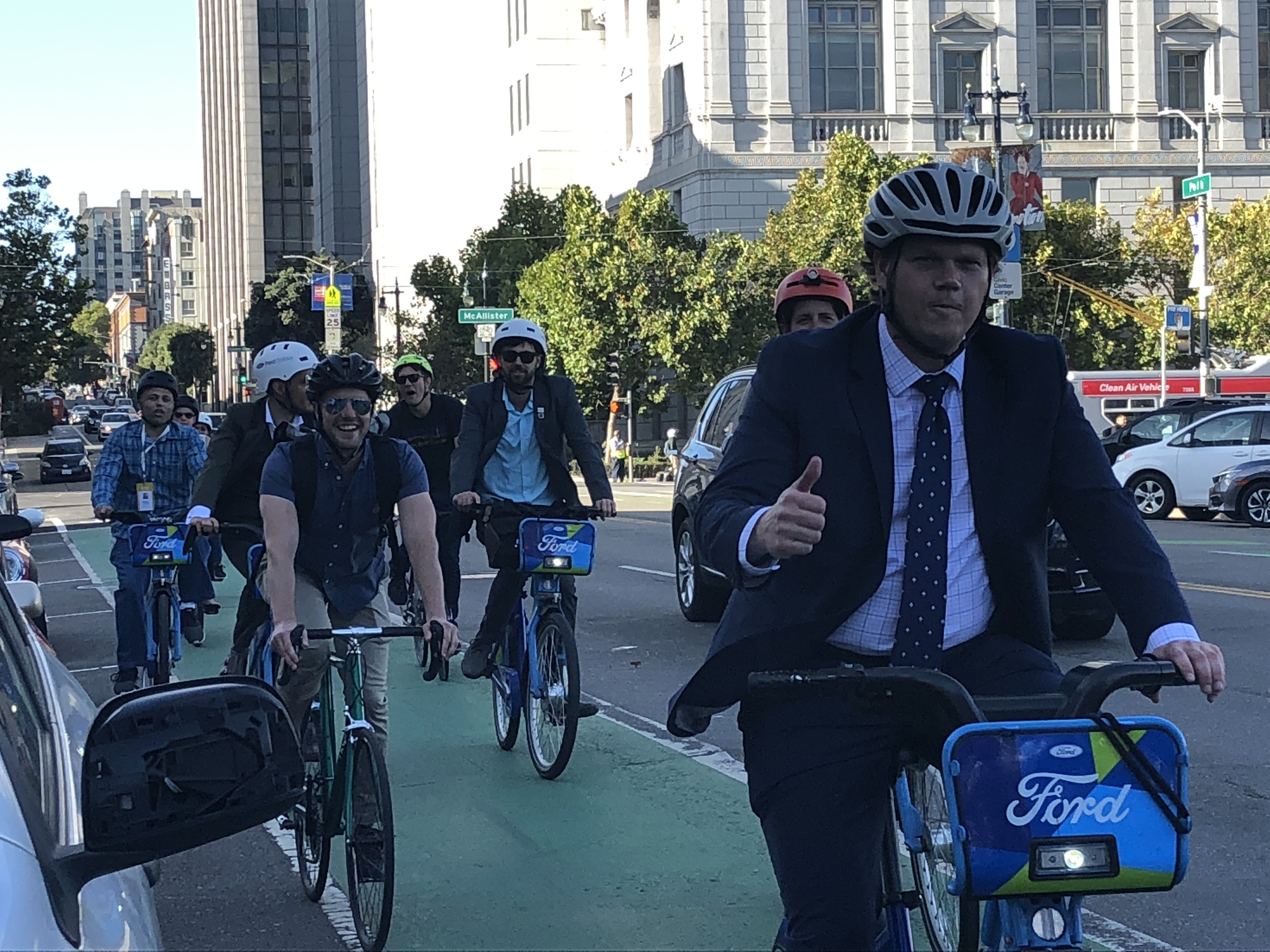 I do believe the moment has come. With the Global Climate Action Summit (#GCAS2018) just finished and Climate Week NYC up next week, discussion of bikes AS climate action should be at an all-time high. If my own part in trying to nudge, poke, prod and amplify that conversation has contributed to any buzz, all the better.

However, there’s this: On September 14, the Summit’s last day, Ivan Penn wrote a great New York Times piece, calling out the disconnect between, among other things, the at-the-ready electric shuttle buses and bike share bikes at the event and the number of hulking Chevy Suburbans at the curbs near Moscone Center, waiting for high profile delegates.

Now, let me go back and walk through this event with a #bikes4climate, social capital leveraging, opportunity lens:

A postscript: watching Twitter today, I came across this fabulous, humorous but INFORMATIVE video from The Urbanist about the ebb and flow of city biking efforts in London. Watch and LEARN, city leaders.

I closed my aforementioned GreenBiz piece with this:

What if a conversation about the opportunity of #bikes4climate was on every agenda, with panels of high-level leaders from both sectors swapping wisdom and finding collaboration points? The expertise, history and innovation foundation for such work is there if you look for it, with all stakeholders not quite realizing they’ve remained in their own corners.

Climate action leaders, please introduce yourselves to bike and mobility industry leaders. We have the citizen interest and the pedal power to help reach Paris Agreement targets.

As so many of my bike advocacy friends point out, it’s about convincing more people to bike even a few of their two mile or less short trips. THIS will get the pedals of change going, for real, and with no well-dressed, not-been-on-a-bike-since-they-were-12, climate action leader photo opportunity involved.

#Bikes4Climate is my cause. Corporations should be jumping to sponsor efforts around this and seeing the bounty of potential in including bikes (getting employees to choose bikes more often, attracting talent by nudging their city’s to develop safe infrastructure etc.) as part of their Paris Agreement climate action commitments and goals. There is no lose, in this win-win-win climate action solution.

I’d argue that city leaders simply cannot say they are among #cities4climate without committing to #bikes4climate for their citizens.

Are you in? My work is helping your city or corporation see the opportunity, build the social capital and leverage its #Bikes4Climate leadership for the greater climate action cause.

I focus on influencer relations and leadership platform building in the plant-based food system and bikes-for-climate-action transitions. My best clients are NGOs/nonprofits looking for a high-level jumpstart with fresh perspective on social engagement, content and strategic event presence.